On September 26, 2021, Patwin Elder Edward “Bill” Wright passed away at his home at Cortina Rancheria, surrounded by family and friends. Born in Knights Landing in 1937, he was 84 years old. 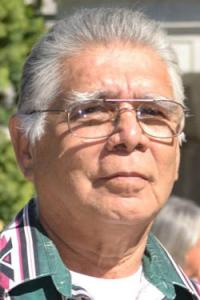 Recognized throughout the state as a deeply respected Indian doctor, healer, and sweat lodge leader, his passing is being felt by the countless Native individuals and communities who knew and loved him. In his doctoring work he helped people heal physically, mentally, emotionally, and spiritually.

UC Davis sits on Patwin land, home to three federally recognized Patwin tribes, the Kletsel Dehe Wintun Nation, the Yocha Dehe Wintun Nation, and the Cachil Dehe band of Wintun Indians of the Colusa Indian community. A special connection exists between Bill Wright and UCD, and Bill Wright and Native American Studies. Brought in by the late David Risling, Jr., Bill was the key member of the Ad Hoc Committee to Honor the Patwin and Native Americans, formed in 2000 after excavation crews unearthed thirteen Patwin graves during the initial construction of the Mondavi Center for the Performing Arts. Bill assisted the committee, guiding the group’s mandate to end further grave disturbances and formulate a campus-wide plan to install historical markers, a contemplative garden, signage, public art and cultural exhibits to honor Patwin history, culture, philosophy and community and Native Americans on campus and the region.

Bill opened his heart and home to the work of the committee which was strongly supported and endorsed by the late Chancellor Larry N. Vanderhoef and former Provost and Executive Vice Chancellor Virginia Hinshaw. All of the Patwin words, concepts and philosophies etched on the stones and monuments of the project originated from Bill’s deep understanding and involvement with his people’s culture and his generosity to share these with the public. From a Native perspective, we know that Bill blessed the efforts of the committee from the very beginning, which helped to ensure the good relations committee members developed towards each other. The first achievement of the committee’s overall plan to honor the Patwin people and the Native American community on the campus and in the region was the Native American Contemplative Garden, dedicated in November 2011. 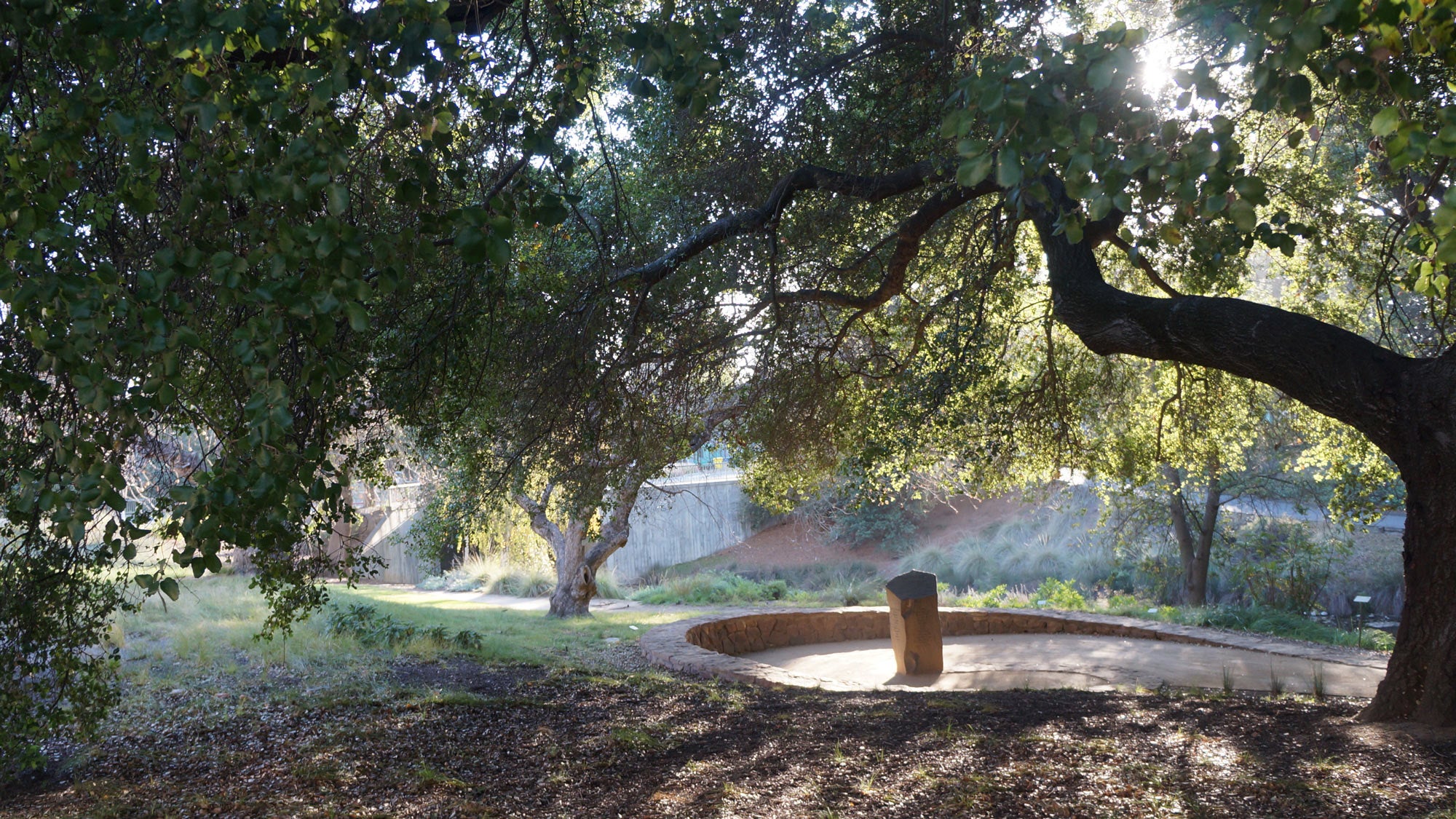 The Native American Contemplative Garden spirals to its end, like the coil of a basket made from natural materials.

When the Mondavi Center for the Performing Arts was inaugurated on October 3, 2002, Bill was asked to do the blessing. This invitation represents a historic moment for the campus because of the words he offered that day. He prefaced his blessing by recalling his own educational experiences of abuse at Stewart Indian School in Carson City, Nevada, but his overall message was one of forgiveness, love, and hope. The following excerpt is etched in stone at the entrance to the Mondavi Center, which is a second completed project of the overall Honoring plan:

Grandfather. Bless all the people who gather here today. Help us to understand and get along in this world. Bless the grounds that these buildings stand on. Those that are gone – the spirits from this land — help those who come through here. Maybe one day, they will understand about the other world, your world. As the students come through here, Grandfather, give them the understanding and knowledge that they search for, and help them grow. I know that the spirits from this land hear me, and they have a right to be angry for what was done to them. But we will give them our respect, and they will respect us, as earthly people. Mistakes were made, but they will forgive us. Grandfather, look over us, and guide us and give us a good day. -O. 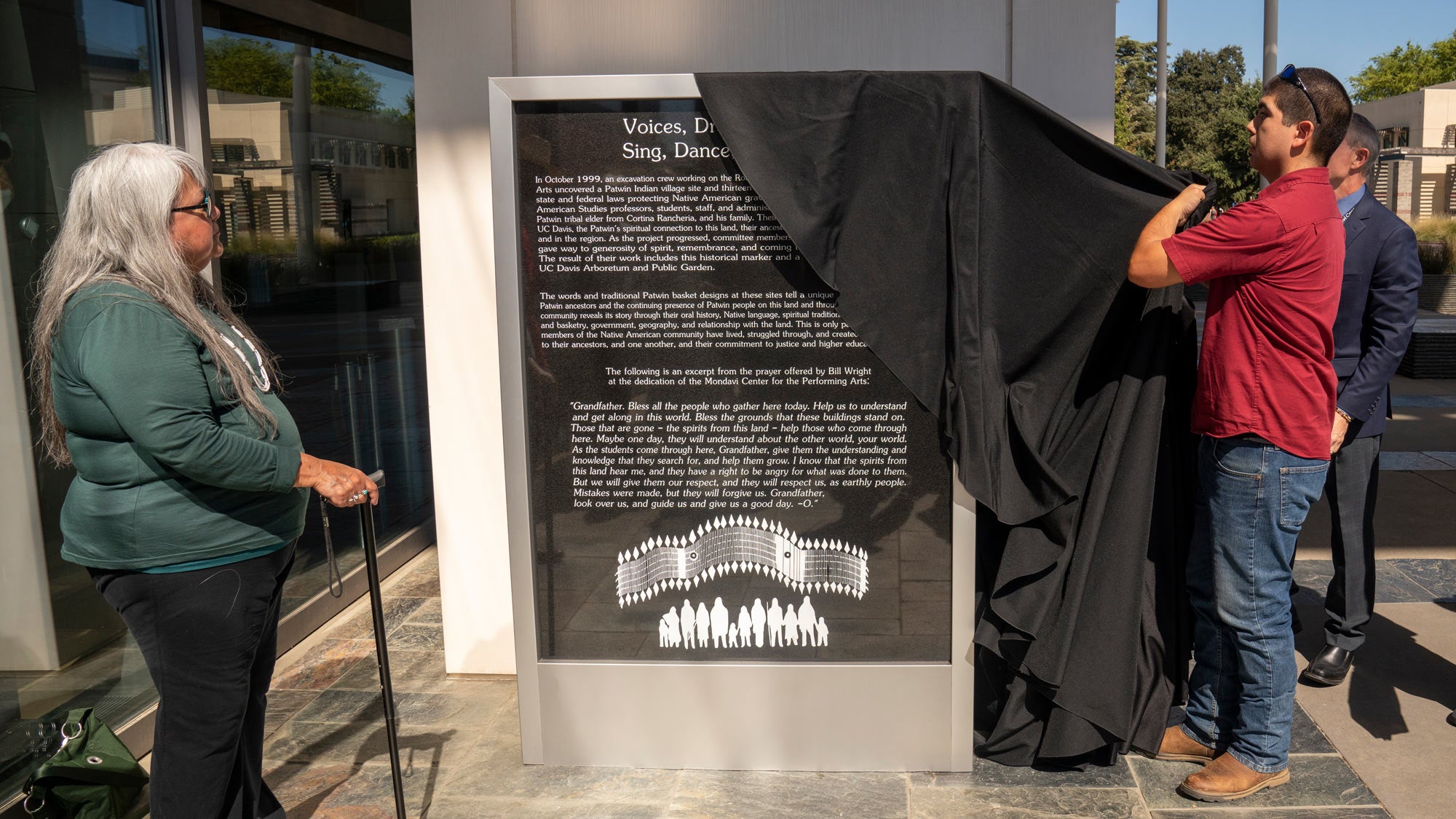 Professor Inés Hernández-Ávila looks on as Charlie Wright, son of Edward “Bill” Wright, unveils monument at the entrance to the Mondavi Center for the Performing Arts, Sept. 26, 2019. (Karin Higgins/UC Davis)

In this blessing, he prayed for everyone, for the land, for the ancestor spirits who are from this land, for all the students who come through our campus, and for understanding and guidance. Read about the dedication of the granite plaque.

When D-QU, the tribal college on Road 31 that used to be an accredited institution, lost its accreditation in 2004, some of us in Native American Studies stepped forward to try to help the school get back on its feet (at the ardent request of David Risling, Jr.). I became Chair of the board, and with help from other board members, several graduate students, and community members, we worked hard to help clean up the school (straightening out the financial aid records, admissions records, correspondence, and physical cleaning of everything). Bill and his wife, Pat, would come to sit with us as we worked. His presence at that time was incredibly comforting and energizing for us, because he was blessing everything we were doing, just by being with us. The same founders of Native American Studies on this campus are the founders of D-QU.

Bill Wright was a big-hearted man, generous, funny, kind, loving, and strict in relation to ceremonial ways, which many of us understand is as it should be. For decades he has given prayerful attention to UC Davis. I end with his words. At one Ad Hoc Committee meeting, Bill Wright pointed to the essential nature of his people’s culture and traditions. “My people have ceremonies to keep themselves in balance with the earth,” he said, “These were meant to keep joy in your life. See the joy in things so that your spirit will be healthy. Be good to one another. Pray for them that they will see the light one day.”

Bill Wright’s funeral will be on October 6, 2021. The University of California flag at the Memorial Union will be lowered on the morning of Wednesday, October 6, through Friday, October 9, in honor of Patwin elder Bill Wright’s life and legacy, and in gratitude for his contributions to UC Davis.

Inés Hernández-Ávila is a professor of Native American studies.