Alumna Erica Costa has a Native American Studies degree from UC Davis and currently works in Davis as a lawyer. (Gregory Urquiaga/UC Davis)

Founded in 1969, the UC Davis Native American Studies Department is one of the oldest of such programs in the country. Undergraduate majors learn about and collaborate with Native peoples from the Arctic to Patagonia and take a cross-disciplinary dive into linguistics, literature, music, visual arts, anthropology, religion, history and other areas. The Department of Native American Studies (NAS) in the College of Letters and Science is one of only three in the country offering a doctoral program. 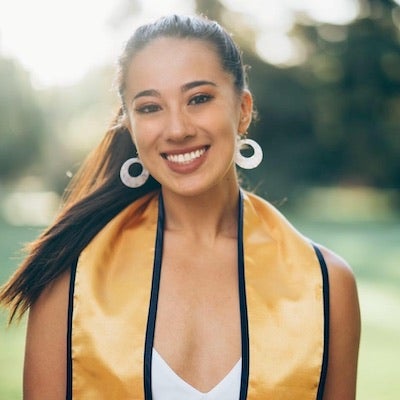 “The NAS department is incredibly interdisciplinary,” said Brooke Warren (B.A., Native American studies, ’19). “I was able to learn about law, the environment, religion and philosophy, health policy, languages, history, gender and art just through my major alone. I am not sure if there is another department that is able to give such a holistic education.”

So what can one do with a degree in Native American studies? Our graduates have taken the degree in many directions: working in higher education for a tribe; serving as an attorney specializing in Native American issues; running a native plant program; and managing volunteers and events for a marine mammal rescue organization. Warren is in medical school.

“What I emphasize is our collaborative work and work on real-world issues,” said Beth Rose Middleton, professor and department chair. “Part of what we do is clear up misinformation about Native peoples. So many students say, ‘We’ve never learned about any of this before.’”

Students get to interact and collaborate with Native nations in the region and beyond on critical efforts, such as language restoration and understanding traditional ways of managing wildfire. Because of the small size of the department, students develop close bonds with faculty and fellow students.

Interest in the major is growing due in part to recent events, from the 2016–17 protests at the Standing Rock Reservation in North Dakota over an oil pipeline to calls for the removal of monuments that honor those who harmed Native peoples, like Christopher Columbus or Sacramento founder John Sutter. As a photographer, professor Hulleah J. Tsinhnahjinnie has documented both. Professor Liza Grandia organized students mapping the Standing Rock protest area that showed the complexity of the conflict in contemporary and historical context. 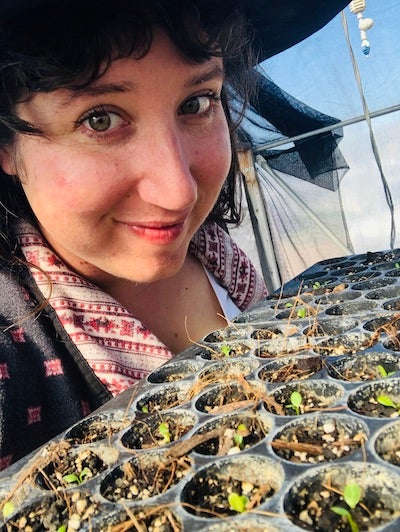 Juliet Maestas (B.A., Native American studies, ‘18) grew up on the Hoopa Valley Indian Reservation in northwestern California and, in early 2020, returned there to manage the higher education leadership program. It was a long journey for Maestas to return home, something she’d always wanted to do. A big part of that was earning her degree in Native American studies.

“It was one the best decisions I ever made,” said Maestas, who had a career and raised a family before attending UC Davis. “It’s worth every penny and I’d really encourage people to consider the program. Even though the university is large, the program is small and you can connect with faculty. They were open and understanding. In California, we have over 100 tribes and you can’t put them all in one box. They understood the diversity.”

One of the most important areas she studied was the Hupa language with Associate Professor Justin Spence.

“I was able to look at historical documents dating back to the 1800s,” Maestas said. “That was priceless.”

As an older student on campus, she found support within the department and through the Native Nest, a campus resource center for Native students.

“It was a good place to go to ask questions and get help,” she said. Some of the younger students looked to her for advice.

While attending UC Davis, she worked full time for the Yocha Dehe Wintun Nation, and each day she’d drive from her home in Woodland to her job in Brooks, then to campus. She went on to earn a master’s degree in higher education administration from California State University, Sacramento, and now oversees the college programs on the Hoopa Indian Reservation in Humboldt County.

Working for many tribes 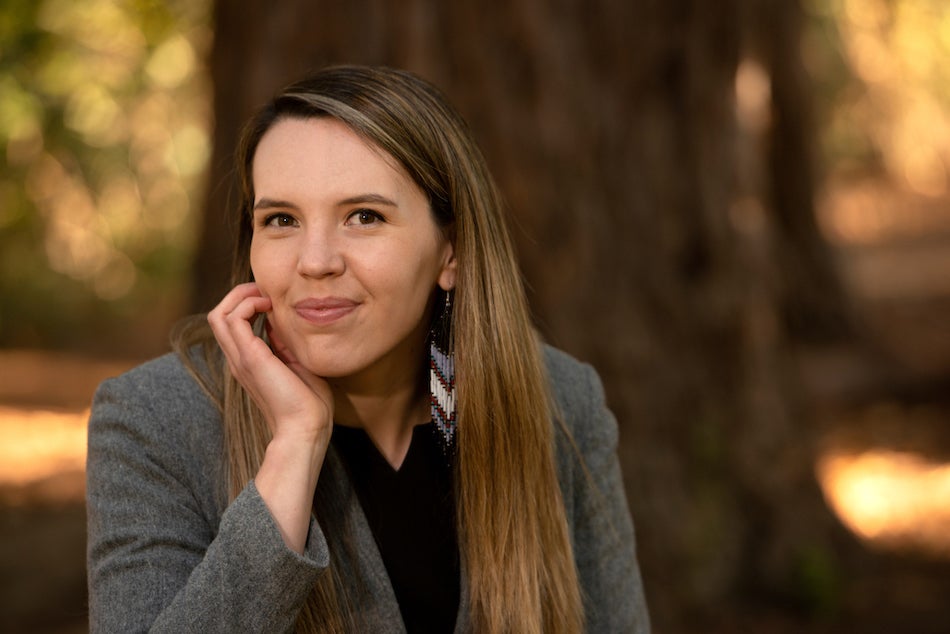 Erica Costa (B.A., Native American studies, ’13) doesn’t work for a tribe — she works for many. She is an associate at Berkey Williams LLP, which recently moved its main office to Davis just a few blocks from the NAS department in Hart Hall. The firm represents Native American interests across the United States.

Costa, a descendent of the Sherwood Valley Rancheria Band of Pomo Indians and Round Valley Indian Tribes, grew up on the reservation but said she didn’t really understand the legal complexity of Native American issues until taking a class in the department.

As graduation neared, Costa wondered, “What am I going to do now?” Then she took a class about Native American issues such as land ownership and water rights. She got so much out of it, she took it again.

“Oh, here we go — I’m going to go to law school,” she recalled. “I had too narrow an understanding of the potential of the major.” Costa earned her law degree from UCLA, where she was executive editor of the Indigenous Peoples’ Journal of Law, Culture & Resistance.

“One of biggest benefits [of the major] is you get to see the professors and your peers over and over again,” Costa said. “The department gave me a lot of support with my law school application.”

A native lens on plants, animals and medicine

Other students have found work in areas that superficially don’t seem to have much to do with a Native American studies degree, but they do.

Áine Minihane’s job takes her to a spot overlooking Rodeo Beach in the Marin Headlands, where she is the program manager for the Marine Mammal Center. There she coordinates work with 3,000 volunteers, organizes events and collaborates on development and communications. She also volunteers at the center for hands-on work with harbor seals. The center rescues and rehabilitates seals, sea otters and turtles from Fort Bragg to San Luis Obispo.

Pueblo by heritage, Minihane (B.A., Native American studies and political science, ’13) was adopted at birth by a white family. They encouraged her to explore her heritage and even took her to New Mexico to look for her biological family. She wasn’t interested.

“I was ashamed of my heritage,” she said. But Native American studies classes “opened a door for me. Learning of the oppression of my ancestors caused a great deal of self-reflection at the time, and sure enough, it never stopped. As history continues to repeat itself in 2020, my studies recalibrated how I see the world, and the lessons I internalized have never been more applicable in my lifetime than this year.”

“The department was ‘a home within a home,’” she said. “I was blown away by the faculty. I feel like I learned from the best.”

While Minihane works with animals, Francesca Claverie (B.A., Native American studies, ’11) gravitated toward plants. The native plant program manager at the Borderlands Restoration Network in Arizona, Claverie began her career at the UC Davis Arboretum. Through Native American studies, she came to understand how the natural landscape, identity, language and politics are connected. Borderlands works with many tribes throughout the Southwest and communities in Mexico as well.

“[Having the degree] has been invaluable in bringing a different perspective to the work I do,” Claveri said. “We work with a lot of tribes and it’s been so important for me to have a formal educational background that guides how we should conduct our work.”

“I wish everyone could take Native American studies classes ­— they are phenomenal.”

Not long after Warren graduated from UC Davis, she started on another educational journey: UC San Francisco, School of Medicine.

“There were three things I wanted in my undergrad experience: to be able to connect to community and learn more about my identities, to complete the necessary pre-med requirements, and to be close to family,” said Warren, whose tribal affiliation is with the Eastern Band of Cherokee Indians. “I knew that UC Davis would be able to encapsulate each of my desires. To what extent, I was not sure — but looking back, I can say that the NAS department transformed my experience completely.”

While at UC Davis, she loaded up on science classes to prepare for medical school, but her NAS classes also helped her future as a doctor.

“Professor Inés Hernández-Avila used storytelling, art and listening to guide in-depth discussions, constantly challenging us to think more deeply and critically,” Warren said. “With her guidance, I was able to understand what my story is and how I want it to shape my goals in my career.”

“This provided me with a stronger sense of who I was and what I wanted to be as a doctor, and helped me explain why I wanted to go into medicine throughout the medical school application process,” Warren said. “I am very appreciative of the entire NAS department — without them, I would not be where I am today.”

Communicator Jeffrey Day is a content strategist and writer for the College of Letters and Science.